Will AI take over jobs 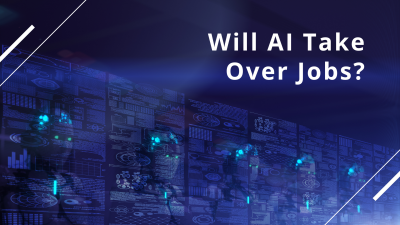 Is it time to dust off your resume?

The next Industrial Revolution is here again and just like previous revolutions, people have one important question: Will AI be taking my job? It’s a valid question. We all crave stability during this time of change.  You want to be sure your livelihood is not in danger.

The easiest answer I can give is, well kind of. AI will be taking jobs, that much is true. Just like the previous revolutions, humans are going to be replaced by something that can do the job better and faster. This isn’t necessarily to say humans are subpar, it’s simply the truth. There are certain tasks that robots can perform better. Machines are better equipped to handle computing tasks and are not limited by fatigue like humans are. However, there are certain jobs that only humans can perform. AI will augment human performance. I like to equate AI to a screwdriver. Sure, you can sit there for hours trying to get a screw in a wall with your bare hands, but that’s incredibly time-consuming and painful. You’d much rather use something specifically designed to get the job done, right? That’s AI. As far as data entry goes, humans get tired and are prone to making mistakes. AI is ideal for doing data entry jobs because computers work quickly and accurately. Will some jobs be taken by AI? Yes. There’s a ‘but,’ here, though.

Robots and AI can not be like humans. Humans are complex creatures. We empathize, have ethics, morals, and above all, we create. Humans are the only creatures that can conceptualize something and bring it to life. Imagination plays a big part in this, and as of now, AI does not have the capability to imagine. Creativity and imagination are traits only we have. Currently, jobs that utilize these traits will not and can never be taken by robots.

In addition, with AI replacing jobs, more jobs will be created. AI and robots need to be managed. Someone will have to fix them when they are broken and correct them when they make mistakes. Someone will also have to create new AI algorithms and robots to do new jobs. There are countless other needs that will prompt the creation of new jobs. Predictions range and industries vary, but all agree: AI will create more jobs than it replaces, sometimes even double than those replaced. Forbes estimates that by 2022, 75 million jobs will be taken, but 133 million will be produced. That’s 58 million new jobs. Many companies, like Amazon, plan to educate their displaced employees into higher positions, making the exhausting job search process unnecessary. Humans are also extremely adaptable. This isn’t the first big societal change we’ve encountered, and it most certainly won’t be the last. Despite that, we’ve persevered for thousands of years. There’s still plenty to be done that only we are equipped to do.

Schedule a demo for our automated commercial invoice service: https://meetings.hubspot.com/ryan1097

We use cookies on our website to give you the most relevant experience by remembering your preferences and repeat visits. By clicking “Accept All”, you consent to the use of ALL the cookies. However, you may visit "Cookie Settings" to provide a controlled consent.
Cookie SettingsAccept AllRead More
Manage consent

This website uses cookies to improve your experience while you navigate through the website. Out of these, the cookies that are categorized as necessary are stored on your browser as they are essential for the working of basic functionalities of the website. We also use third-party cookies that help us analyze and understand how you use this website. These cookies will be stored in your browser only with your consent. You also have the option to opt-out of these cookies. But opting out of some of these cookies may affect your browsing experience.
Necessary Always Enabled
Necessary cookies are absolutely essential for the website to function properly. These cookies ensure basic functionalities and security features of the website, anonymously.
Functional
Functional cookies help to perform certain functionalities like sharing the content of the website on social media platforms, collect feedbacks, and other third-party features.
Performance
Performance cookies are used to understand and analyze the key performance indexes of the website which helps in delivering a better user experience for the visitors.
Analytics
Analytical cookies are used to understand how visitors interact with the website. These cookies help provide information on metrics the number of visitors, bounce rate, traffic source, etc.
Others
Other uncategorized cookies are those that are being analyzed and have not been classified into a category as yet.
SAVE & ACCEPT